Nobel Prize is the first international award for achievements in physics, chemistry, medicine, literature and for peace. Each prize consists of a medal, personal diploma, and prize amount. Based on the will of Alfred Nobel, the Nobel Prize is given every year since 1901. Nobel Prize in economics is awarded since 1968.

Until 1968, in principle more than three persons could share a Nobel Prize but it never happened in practice.

Originally, a person could be awarded a prize posthumously if he/she had already been nominated before February 1 of the same year. Since 1974, the Nobel Prize may only be given to a deceased person to whom it was already awarded (usually in October) but who had died before he/she could receive the prize on December 10.

The front side of the medal

The front side of "Swedish" medal (Physics and Chemistry, Physiology or Medicine, and Literature) is the same, featuring a portrait of Alfred Nobel and the years of his birth and death in Latin - NAT-MDCCC XXXIII OB-MDCCC XCVI.

The back side of the medal

The main inscription on the reverse side of all three "Swedish" Nobel Prize medals is the same: "Inventas vitam juvat excoluisse per artes," (inventions enhance the life which is beautified by arts). Letters REG. ACAD. SCIENT. SUEC abbreviate The Royal Swedish Academy of Sciences

The medals in Physics, Physiology, Medicine and Literature were designed by Swedish sculptor and carver Erik Lindberg.

Up to 1980 the "Swedish" medals, each weighing approximately 200 g and with a diameter of 66 mm, were made of 23-karat gold. Since then they have been made of 18-karat green gold plated with 24-karat gold.

Today the "Swedish" medals are cast by Myntverket - the Swedish Mint - in Eskilstuna.

The Nobel medals look the same since 1902. The design of the reverse sides of the medal was not finalized in time for the first Award Ceremony in 1901.

On all "Swedish" medals the name of the Laureate is engraved on a plate on the reverse.

The nomination of candidates is strictly defined. It differs according to the subject of Nobel Prizes. The disclosure of information about the nominations is restricted, until fifty years have elapsed.  The nominations are closed up on February 1. There are usually 250 nominees for each prize. 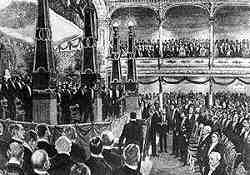 We always welcome your feedback and comments.
nobel.prize@centrum.cz